Familiarity.  It can be comforting, with a sense of security.  I am reminded of a tremendous moment I experienced while working as a caregiver at a local assistant living home. Most of the folks were self-sufficient, enjoying the social aspect of the facility. While others struggled with high moments of joy only to be overrun with the anger and fear foun

d in Alzheimer’s. While checking on a resident, it was pointed out to me that ‘Preacher’ (whom I lovingly nicknamed) was wandering the halls. I went and found him. The look on his face was complete ‘lost-ness.’  His aged demeanor in the previous days was that of dignity, maturity and strength, but not today.

He and I had shared conversations about God and His Word in prior days, he stating he was once a pastor. I asked him one day, “Preacher, what is on your heart, if you could preach right now, what would that be?” He was silent for a moment, as in deep thought, and then he began to share about the King of Syria.  For the next few minutes as we shuffled along, meandering to the dining hall, he preached to me the most tender little sermon.

However today, there was no sermon. Alzheimer’s had again reached out and pulled him in. Finding him in the hall near his apartment, I suggested we go in and sit down for a little while. Taking the key he held in his hand, I opened the door and lead the way. Preacher took a seat on his sofa, his eyes wandering about the room, as if looking for something ANYTHING that defined this place his, his home, which defined …him. Then, looking at me with longing, he told me that his house, ‘just across the river’ was a nice little place. Confusion taking over his continence, “But this morning when I woke up I was here. All my furniture, my things, but this is not my little house.” My heart now hurting, sitting next to him, I continued to listen, “I don’t know who I belong to,” he said. Leaning forward, looking deep into my eyes, with bewilderment and agitation, he whispered, “Um… what should I do?”  My eyes returning the intensity of his, I quietly within my heart began to ask the Holy Spirit for wisdom, words to comfort, words to calm.

After calling and leaving a message for his son to please call his dad, while hanging up the phone, Preachers eyes followed my every move. I knew he needed more. I asked him, “Would you mind if I prayed for you, we’ll talk to God?” It was THEN, there it was, and there HE was. Something sparked familiarity. He may not have recognized me, or the place, or the time, but GOD he knew! His eyes began to well up. I reached for his hand, he in turn enveloped mine in his. And I prayed, I prayed for peace, for clarity of mind, and for God’s all-consuming ‘calmness’ to come on him. After I prayed, he too with confidence and strength that exceeds any I have known, he prayed. When the final ‘Amen’ was said, he grasped my hands a little tighter and thanked me.

As the Psalmist writes in Psalm 71 “Be my rock of refuge, to which I can go … for You have been my hope, O Sovereign LORD, my confidence since my youth…” Preacher conditioned himself over the years, knew his God, he KNOWS his God. He knows who he belongs to. God is familiar.

There WILL be times when life gets ‘unfamiliar,’ even fearful, when we too may wander the halls of this world. However, may we all be like Preacher, position and condition, one might say, ‘train’ to know our God. 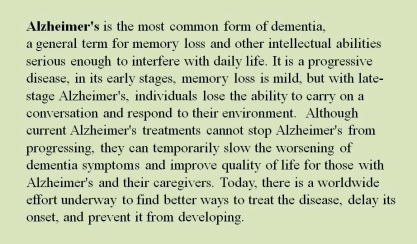 Please support the fight against Alzheimer’s, consider donating to the research for the cure at: http://www.alz.org/join_the_cause_donate.asp

This entry was posted on July 21, 2016 by Inspired Fountain. It was filed under * Miscellanous Stuff and was tagged with Alzheimer's and God.