A Day I Can Forgo 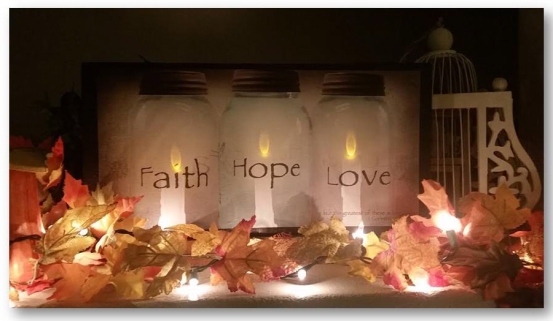 It’s here, THAT season, it’s already in stores. Halloween.  Stores have freshly stocked shelves with 30% off ticketed items by the rows. Tons of stuff! Okay, I am not fully certain of the weighted measurements, but there’s lots of ‘blackness.’  Black cats, witch hats, spiders, eerie tombstones and yes, the ever dreaded skulls.   I LOVE the fall, it is my favorite season, the colors are so rich, I decorate seasonally my home with the warm orange, burgundy and brown tones, (my mantle pictured above) but Halloween does not roll this gals socks.

I am often asked why I have chosen not to celebrate Halloween, why I don’t find it ‘all in fun.’  What is fun about it – the basic theme is of fear, death, and witchcraft, um… no, not for me. Before I get all kinds of comments, emails, texts, and smoke signals, please let me explain, why (for me) I chose not to.   My family used to do the Halloween thing when I was little, sure I wore the thin fabric climb in costumes with the sweaty plastic masks.  But, after I came to understand and was adopted as a daughter of the Most High God, learning of His Majesty and His glorious light, I do not participate in the day of darkness. Yes, you would say darkness and light struggle 365 days a year, why be bothered by one day, one-singled-out-day.  A day I can forgo.

For the life of me, I cannot understand WHY someone would voluntarily, even cheerfully submit themselves to haunted houses and ghost hunts.  All in fun?  No, not for this gal.  I have seen and experienced too much from the dark side to play with it like a child’s toy or pretend in dress up.  While the ‘all in fun’ is masked with candy, parties, costumes, and laughter, in the background when no one seems to notice, there are cultic activities taking place.  The number of self-identified witches in the U.S. is doubling every 2 years, those deeply into the occult take this holiday very seriously and yes, the dark forces they are dealing with are very real!  (* See the history of Halloween below)

Paul wrote, “Hate evil and cling to what is good.” (Romans 12:9)  Is it God-honoring if we are clinging to good, while we cheerfully allow evil to run rampant around our feet?  That running around could soon become a snare.  Sadly, there are many who ‘all in fun’ participate in seemingly innocent activities, when ‘our great enemy the devil prowls around like a roaring lion looking for someone to devour.’ (1 Peter 5:8)  We need to remember darkness ALWAYS has an agenda!  Always.  It will come again and again for any crack, any opportunity to subtly peek in with the ugly and demonic.  If not addressed, it will crawl in, slither about quietly.  If we think it will stand up in the middle of the room and wave “Here I am!” then we are only fooling ourselves.

According to Wiccans, Halloween is the time when the veil between the living and the dead is considered to be the thinnest, they celebrate and take advantage of such status.  And by the way, (standing a lil taller on my soapbox) there is no such thing as a ‘Good Witch’ regardless of how Hallmark wants to title it.  Adding one more (not in detail) note. For satanists, Halloween is one of the most important celebrations of the year, it is documented in their ‘book’ that after one’s own birthday and another icky day, Halloween is most important. I chose not to give detail on this subject, satan (lil ‘s’) is not worthy of my time or to have his name capitalized or in print.

Gently climbing down off my soapbox (as not to hurt myself) and dragging it back to the corner.  You are loved.

*History of Halloween: “Halloween’s customs are thought to have been influenced and dated back to the ancient Celtic festival of Samhain (pronounced sow-in). The Celts, who lived 2,000 years ago in the area that is now Ireland, the United Kingdom, and northern France, celebrated their new year on November 1. This day marked the end of summer and the harvest and the beginning of the dark, cold winter, a time of year that was often associated with human death. Celts believed that on the night before the new year, the boundary between the worlds of the living and the dead became blurred. On the night of October 31 they celebrated Samhain, when it was believed that the ghosts of the dead returned to earth. To commemorate the event, Druids built huge sacred bonfires, where the people gathered to burn crops and animals as sacrifices to the Celtic deities, this done in attempts to appease them. During the celebration, the Celts wore costumes, typically consisting of animal heads and skins, and attempted to tell each other’s fortunes.” [History.com] In addition, other articles speak of folklore that costumes were worn so as to disguise the living, so the dead returning could not identify them. Also, the bonfires were built with the intent to keep the souls of the dead from falling to earth.