Often we read through the Christmas story and highlight the most spectacular parts, singing angels … “Fear Not…” statements, the Star of Bethlehem, and yes the 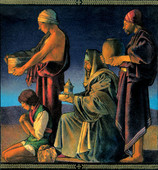 dingy manger.  YET, there are some quiet and seem less significant items to be had in the excitement.

Consider if you would, the Magi as they prepare for their trek out to find the child to whom the Star belongs.  They are packing, dividing up the supplies list, then they come to the gift inventory, gold is given to the first, then frankincense handed to another, ‘O yeah, the myrrh is last’.  How would YOU like to be handed the myrrh, and picture yourself bowing low, head to the floor while you offer M-Y-R-R-H  (said with an Eeyore deep tone) to the King of Kings!  You may think  “Dude, why do I have to carry the white elephant gift???”

AH… the gifts, gold, frankincense and MYRRH.  Have we ever really thought WHAT is myrrh?  I can assure us all that it was not a last minute addition, or a ‘re-gifting’ of an unwanted gift.

The divine significance of myrrh:

Exodus 30:22-23  Myrrh ~ an ingredient used in the anointing oil of the Tabernacle and the priests.

Picture now, the Christ child, perhaps two in age, curly dark hair, possibly pudgy cheeks.  At His feet, men of wisdom and honor now place gold, frankincense and MYRRH.  The anointing oil of the TABERNACLE and THE Priest.  “The Word became flesh and made His dwelling among us…” (John 1:14)  The perfumed oil poured on His feet as a grown man, that soon would be pierced.  The oil added to the spices wrapped around His body following His death.

Myrrh, how prophetic.  A new appreciation for the gift.

Gifts given to Jesus have GREAT significance.  It is our heart He wants.  May we too bow low, offer what we may think insignificant.

Have a VERY blessed CHRISTmas!

This entry was posted on December 25, 2008 by Inspired Fountain. It was filed under * Devotionals .