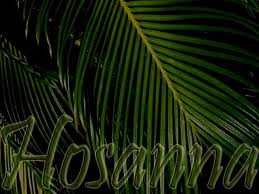 Let’s set the stage:  LISTEN ~ do you hear the muffled sounds of a crowd? Now the clip ~ clop of hooves? Someone is yelling something. Who is it that comes riding in on a donkey… the LAMB of God! (Mark 11:7-10) The crowd yells “Hosanna… Hosanna in the Highest.”

Hosanna is the Greek version of the Hebrew saying ‘yasha na’ (yaw-shaw naw) meaning – ‘save we pray’. This is taken from the Hallel, Psalms 118:25,26

“O LORD, save us; O LORD , grant us success. Blessed is he who comes in the name of the LORD. From the house of the LORD we bless you.” (NIV)  The King James says “Save now, I beseech thee” (Hosanna)

As Jesus rides into Jerusalem, they  yell “Hosanna!” ~  “Save we Pray!” Can you grasp the impact of what they are

saying? Jesus was fulfilling the prophetic words of Zechariah 9:9 and that of 2 Samuel 7:12-13

Then.. just 4 chapters later, that same crowd was again yelling, but this time. “Crucify Him! ~ Crucify Him!” Little did they know they were yelling the same thing. both times! For you see, for Jesus to ‘save we pray’, they had to ‘Crucify Him!’

Loved ones. Jesus is our Passover Lamb! The REAL  party is next week….  Easter Sunday.   Luke chapter 24. Early, three days later after the death of Jesus, women were said to have gone to the tomb, when arriving they found the stone had been rolled away. When they entered in, they did not find the body of Jesus, yet ‘two men in clothes that gleamed like lightning stood beside them’ (wouldn’t THAT scare the Easter bunny out of anyone). The men said, “Why do you look for the living among the dead? He is not here; HE HAS RISEN ” (emphasis mine). They reminded the women of Jesus’ words . “The Son of Man must be delivered into the hands of sinful men, be crucified and on the third day be raised again.”

This is where we celebrate .. ‘Makarios Anastasis ! Blessed Resurrection!’ Oh the joy of Easter, the story, the reality, the TRUTH.  Hosanna, Easter … the gospel truth.

Hosanna has become a phrase of praise. In it’s declaration it holds the complete gospel story. ‘Save we pray’. THAT HE DID!

Blessings to you and yours,

This entry was posted on April 1, 2012 by Inspired Fountain. It was filed under * Miscellanous Stuff and was tagged with Hosanna, Jesus resurrection, Palm Sunday.