I sat quietly reading in my OH SO comfy chair, when my son called out rather  energetically. “Mom hurry I NEED you”.  As I came into the living room, he hands  me a controller to Playstation (like I know what to do with it). He begins to  yell out commands, which I assume I am supposed to be following. I took a seat  and thus begins the hysterical game playing. I was laughing so hard, I  began to wheeze, tears were filling my eyes, the controller nearly falling out of my hands as I bent over.
We were playing  Star Wars, he kept saying  “follow me!” I was TRYING! I didn’t know which buttons to push, so I pushed them  all. Somehow I was supposed to get my man up on that scooter thingy. Much to my  own amusement, I kept crashing into trees. My job, as I found out later, was to  be a distraction so his guy could finish his mission. Before I knew it, Matthew  says, “Ok, you can stop now” – had I even begun? The theme to Star Wars came on  and I knew he was victorious.  My job was finished there.

Amazing  what part we play in others lives isn’t it?  That reminded me of a show I had seen. It

was a documentary on those massive ships in the  military. One in particular was an aircraft carrier. They focused in on the  department that had been lovingly called the ‘yellow jackets’ (Flight Deck Officers). These were the men and women who, yes, wore yellow jackets and spent  their time helping direct pilots as they prepared to take off, and in their landings.  One of their duties was known as ‘walking the deck’. Knowing a pilot was either preparing for take off  or landing they would line up across the deck, and slowly – meticulously look  for any debris. The debris if left on the flight deck could be very hazardous to  the plane, pilot, the mission.

I find it very interesting as I liken it to our own  relationships found in the Kingdom of God. We have many roles we play in others  lives, like cheerleader, counselor, confidante, mentor, teacher, and friend. But we  are also to ‘walk the deck’ if you will, and do our part helping to remove any  debris or obstacles along the way.  Do what it takes to help another to be successful.  We are called to encourage. Much of the time  our encouraging a brother or sister takes … ‘action’.

Paul shares in, 1 Thessalonians 5:11  “Therefore encourage one another and build each other up.”  ‘Encourage’ one another. Meaning ‘come along  side, to aid with help.’   Here’s a dandy – ‘to beseech with a stronger force’.  We are to admonish, exhort to better things, cheer each  other on in God!  He then says, ‘build each other  up’, in the King Jimmy it is ‘edify’. Paul is talking in architectural terms. We are constructing.  NOT demolishing!  Do our words, our actions help build others up, does it motivate them to better things?  When we leave their presence did we leave them in a better heart c 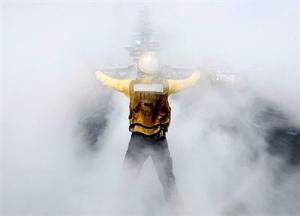 ondition?
May we too,  put on yellow jackets (in spirit of course) link arms with another and join the heavenly forces. May our words of encouragement, be met with  our actions of love. May we love enough to point out, pick up, and remove  any debris, while doing so, we flag them off as they take off soaring to their mission.  I am fully persuaded there WILL be times when it is messy, times when we get a bit of jet fuel dumped all over us, but beloved it is worth it!  To see them…  soaring!

May we love enough to build up, not tear down. May our ‘come along side’  be motivated to help shape another. Shaping them into the image of Jesus. Great  take offs and landings!  Perhaps we too would hear the theme to Star Wars, well personally I prefer the theme to ROCKY! (queue instrumental song in your head)

Have a God-loving, looking good in yellow ~  week.

This entry was posted on November 6, 2012 by Inspired Fountain. It was filed under * Miscellanous Stuff and was tagged with Encourage one another, encouragement.