The Name of Jesus

The Name of Jesus

“Therefore God exalted Him to the highest place and gave Him the name that is above every name, that at the name of Jesus every knee should bow, in heaven and on earth and under the earth, and every tongue confess that Jesus Christ is Lord, to the glory of God the Father.” (Philippians 2:9-11)

In today’s culture, the name Jesus, (for the majority) flippantly flies off our tongues without a second thought.  For some, they use it in vain. I remember a time in an elevator when a young man, said “Jesus” (in a not so kind way.)  I just stood there looking at him, he roughly said, “WHAT?  I didnt swear!”  I simply responded, “You have no idea.”  The verse says, “At the name of Jesus, every knee SHOULD bow…”  Frankly, it is not a suggestion. Sorry Dude!

For others, the name of Jesus is used habitually only in routine, “In Jesus name, Amen.” I have known a few, who state the name of Jesus with the mentality ‘I want it, to get it, I use it’ as if a magic wand waved over their desires.

Yet, there are those, to them the name is precious, intimate, powerful and spoken with respect.

According to the New Testament all of God is expressed and displayed in Jesus,  “For in Christ all the fullness of the Deity lives in bodily form…” (Col. 2:9) Jesus, Himself said in John 14:9 “He who has seen Me has seen the Father” In Acts 2:36 and Acts 17:3 it explicitly says that Jesus is the Christ. He is the long awaited Messiah, whom over 100 prophecies were fulfilled – “Therefore let all Israel be assured of this: God has made this Jesus, whom you crucified, both Lord and Christ.”

Both Joseph (Matthew 1:21) and Mary (Luke 1:31) were instructed at different times to name the Son of God, Jesus. There was no confusion, no arguments, no making a list and voting on it. It HAD to be Jesus. There was nothing unusual or outstanding about the name. It was a common name and many Jewish parents named their boys Jesus, up until the second century.  In some cultures the name is still given. It takes the Person behind the name to unveil the true impact of the name.

The name Jesus is Iesous in the Greek, (ee-ya-sooce) being used 972 times, meaning ‘salvation’. It comes from the Hebrew word Yeshua or Y’shuah, the name in which Joshua is derived. In short, it is a compound name, Yah, (Yahweh/Jehovah) – yasha (savior, deliverer) Jehovah our Savior. The name speaks of His mission and purpose to mankind, “To seek and save the lost…” (Luke 19:10)

Andrew Murray a well known Theologian says “A name is a word or expression in which a person is represented to us.”  The name and title of Jesus Christ varies as we progress through the New Testament.  The disciples knew Him first as Jesus, then the Messiah (Christ.) And no Christ was not Jesus’ last name, Christ means ‘Anointed One.’ Thus prior to His resurrection He was primarily known as Jesus Christ. After His resurrection, He often was referred to as Christ Jesus.  Paul first knew Jesus from a heavenly perspective (see Acts 9:1-6) his experience reversed to those of the disciples, he was faced with His Lordship, and then knew Him in an intimate way as Jesus. Even Stephen calls out when he was being stoned, “Lord Jesus!” (Acts 7:59).

There is a divine release every time the name of Jesus is used in a godly manner.   There is amazing power and authority in the name.  Jesus declares 17 times “In My name…” Believers gather (Matthew 18:20) Welcome a child (Mark 9:37) Receive a person in need (Mark 9:41) Bring glory to the

We see the disciples operating in the anointing of the Spirit through the name of Jesus, in faith they were sent as His representatives, like those given a Kings signet ring, holding divine authority.  Acts 3:6-7, Peter heals the crippled man, “In the name of Jesus Christ of Nazareth, walk.’ Taking him by the hand, he helped him up and instantly ‘the man’s feet and ankles became strong.’  We too, in faith walk in the same authority!  Jesus says; “I tell you the truth, anyone who has faith in Me will do what I have been doing. He will do even greater things than these, because I am going to the Father. And I will do whatever you ask in My name, so that the Son may bring glory to the Father.”  (John 14:12-13)  We will do… SO THAT, the Father is glorified!  Jesus.

We are also baptized in the name of Jesus, this is found in what I call the ‘Peter Package’ Acts 2:38, “Peter replied, “Repent and be baptized, every one of you, in the name of Jesus Christ for the forgiveness of your sins. And you will receive the gift of the Holy Spirit’, (see also Acts 10:48) Baptism identifies us with Jesus and with the community of believers. We are going down in the waters dead to self, coming up alive in the character of Christ, we now share in the benefits of the fullness of God, yet we also carry the responsibly of that name.  Go, do, and be in MY name!

Satan does NOT want people to find out about the true worth of the name of Jesus.  “Signs will accompany those who believe.  In My name they will drive out demons, they will speak in new tongues.” (in red letters, Mark 16:17) Even the devils are powerless because of His name,  “Lord, even the demons obey us when we use Your name!”  (Luke 10:17) He knows. So he does everything in his power – so we will not.  Charles Stanley writes, “Satan is capable of deceiving you, craftily manipulating you, and seducing you… he’s going to come back again and again.  Paul didn’t just admonish us to be strong in the Lord-he told us how to be strong.” (Emphasis mine)

When we speak the name of Jesus and stand clothed in His nature we are telling the devil, “You have to go through Jesus to get to me!” Wahoo! Go GOD! We are told to put on the full amour of God, (Ephesians 6:10-18) in doing this we are wrapping ourselves in the name and identity of Jesus Christ.  We are now clothed in righteousness, peace, faith, salvation and we hold and raise the Word of God applicable for every need.  James 4:7 (see also 1 Peter 5:8-9) “Resist the devil and he will flee.” This ‘resisting’ is not passive avoidance, but literally means to take a stand, to set oneself against.  It is taking an aggressive offense!

I dare to be so bold as to say, that the picture of Jesus has become so 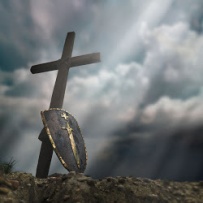 distorted that at times we still see Him on the canvas painting (and leave Him there) Standing at the door knocking, dressed in His white rob, with His head slightly bent as if to listen for a response and a soft facial expression. BUT … when you need Him most – Revelation chapter 5, He IS standing, but now beside the throne of God, all saints and angels bow and cry out “Worthy, Worthy is the Lamb…” Awesome!  I’m not done yet. Chapter 19, Jesus is now seen not as the slain Lamb, BUT the Victorious Warrior… (vv.11-16) “He sat on a white horse… His eyes are a flame of fire….He is clothed in a robe dipped in blood, His name is the Word of God, on His thigh is written KING of KINGS and LORD of LORDS!”  Now, who do you want in your corner! Jesus.

Listed among the 10 Commandments, is the command: “You shall not take the name of the LORD your God in vain…” In other words do “Not misuse the name of the LORD your God.” (Exodus 20:7)  “Lotish et Shem YHWH Eloheicha I’shav.” (Spell Check hates it when I do that) In the Hebrew, basically “Do not make His name worthless.”  Stop – Pause and think on that.  May we know Jesus so intimately, His name precious on our tongue, “Jesus.” The name full of power and authority. May it be said with strong confidence knowing “Him that is true…” (1 John 5:20)

This is an excerpt from “Knowing God by His Names” (see whole study: https://inspiredfountain.com/category/knowing-god-by-his-names-study/

Resources used in this study: Living & Praying in the Name of Jesus – by Dick Eastman & Jack Hayford; Article – Restoration of the Sacred Name (Author Unknown); Article – How Did the Name Jesus Originate? – by Dr. Lee Warren, B.A.,D.D.; He Shall be Called – By Robert J. Morgan; When the Enemy Strikes – by Charles Stanley; The Name of Jesus – by Kenneth E. Hagin;  Lexicon of Greek Names; Theological Dictionary of the N.T.; The Strong’s Concordance; The Complete Word Study Dictionary of the Old Testament; The Vines Expository Dictionary; The Theological Wordbook of the Old Testament.

This entry was posted on May 18, 2017 by Inspired Fountain. It was filed under * Miscellanous Stuff and was tagged with Jesus, Knowing God by His Names, the name of Jesus, what does Jesus mean.