Moses. He led the people in the wilderness for forty years. Forty long dusty dry years.  The time was full of murmuring and complaining among the people.  Multiple times the narrative states Moses (and Aaron) went to their faces before God. Could it possibly be that they were ducking?  Ducking the wrath of God?  Just a silly (putting myself in the story – thought). I can’t imagine the frustration Moses may have experienced. On one occasion, they need, want–DEMAND water.  Moses goes to God. God told Moses to strike the rock and water gushed forth (Exodus 17). God miraculously provided in the wilderness.

Further in the story; another place and time in the wilderness; they needed, wanted–DEMANDED water (Numbers 20). The same exact scenario.  But was it?  Moses was given a different set of instructions. Take the staff, gather the people – speak to the rock.  Moses summoned and spoke to the people (not the rock) “Must we bring you water out of this rock?” He raised his staff and struck the rock not once–but twice.  Water did gush out. All the people, including the animals got their fill.

God tells Moses because of this; he wasn’t going into the Promised Land. Not only did Moses take credit for the miracle water, but it is painfully interesting that God says his disobedience was “breaking faith” (ESV) and he did not esteem God holy (Numbers 20:12 & Deuteronomy 32:51-52). Moses’ behavior conveyed he was not satisfied with what God instructed and his altered actions were more forceful and terrifying, thus not giving a proper representation of God.

How harsh was that!  We all make mistakes.  Poor choices.  Stupid behavior.  But.  God gives specific instructions for–a purpose.  Often, it is detailed.  Sometimes, a general point. But it is His purpose.  We may not or cannot see it and may never know–why.

When we read throughout the bible, we see God’s redemptive story from the moment God asks the man in the Garden, “Where are you?” all the way through to last “Amen” of scripture. So much foreshadowing of Jesus.  Jesus, Himself declares the scriptures speak of Him (Luke 24:26-27).

Moses’ disobedience messed with God foretelling of Jesus.* Do not mess with the message! You see, Jesus is our living water (John 7:38) and Paul spoke about when the ancients were in the wilderness and God provided food and water (speaking both in the natural and the spirit) they “drank from the spiritual rock that accompanied them, and that rock was Christ” (1 Corinthians 10:4, BSB). Jesus, our Rock was only struck once–at Calvary. If we want the living water, we need only to “speak” to Him in prayer.

How often do we truly consider our (dis)obedience?  Do we too alter our response by behaving differently, our choices, thinking we know better? Does it only affect us?  Our family?  Our church?  Our community?  Or perhaps delay a work of God?  Do we, like Moses, offer an improper representation of the Lord?  Do WE mess with the message!  Regardless of our frustration we are to obey.

We can’t leave Moses there.  This failure did not break his relationship with God.  He continued to lead the people forward.  He did make it. He made it to the Promised land. Fast forward, Mark 9:2-8: Mt of Transfiguration: Jesus, Peter, James and John with an appearance of Elijah and Moses. Moses initially asked to see God’s glory (Exodus 33) God said, “You can’t handle it” not here, not yet (paraphrased) but here on the Mt he saw His glory – Jesus. (John 1:14).

*Many things in the OT were what is known as typology.  A symbol, a representation of something yet future. 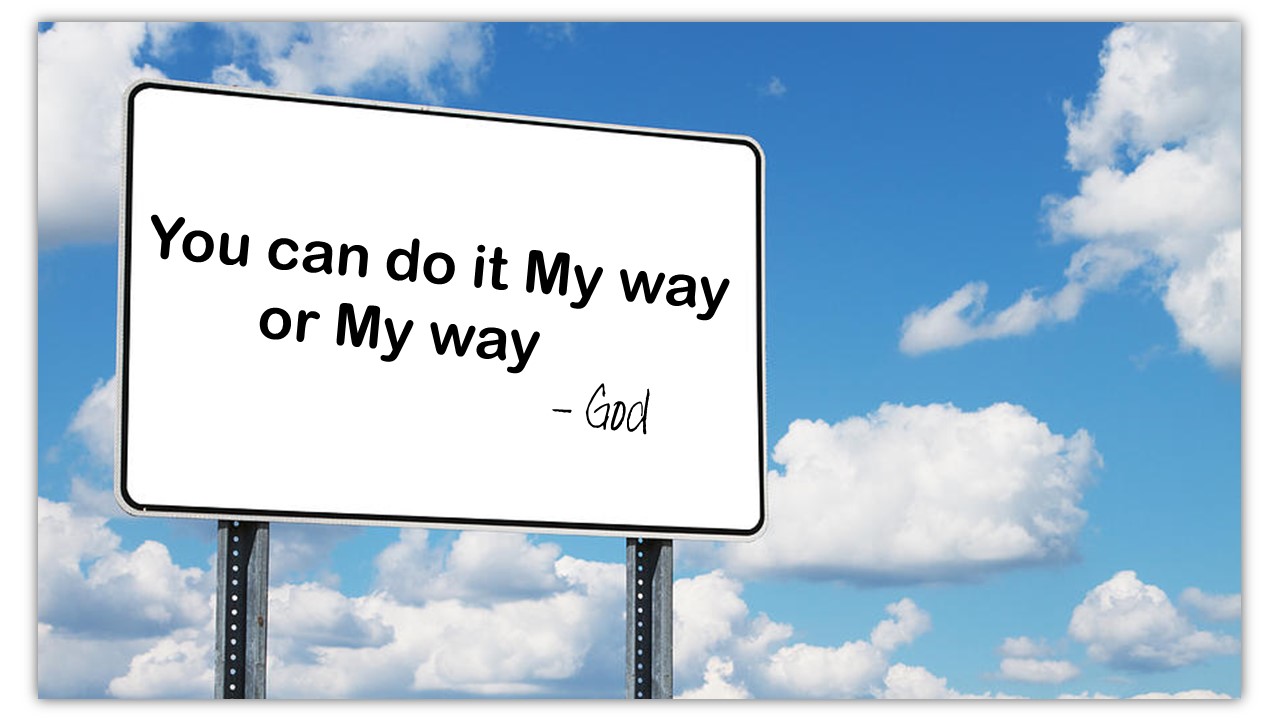 Obedience. Obedience can be defined as ‘having a clear understanding of the instructions and acting accordingly.’

God is very serious about His instructions; we see this in 1 Samuel 15. The narrative states, “The Lord of Hosts says…” He proceeds to tell King Saul (through Samuel) to ‘utterly destroy’ everything about the Amalekites – the people and property. A lil further in the story, “But Saul and the people…” Oh, they took care of most of the people and some of the property and livestock* – but most and some is not obedience. Did they have clear instructions? Yes. Did they obey? No.  God said, King Saul “turned away from Me and has not carried out My instructions.” (v11) Saul is told, “Because you have rejected the word of the LORD, He has rejected you as King.” (v23)

God has a purpose for His instruction. Often when given our marching orders we tend to grab the envelope and run off with an “I got this!” and only pause down the road a bit and try to figure out a shortcut. We forget that God is Omniscient (All-knowing) and He is not limited by time or space, so He sees and knows all directions on our timeline. Meaning – what we don’t see NOW, He sees and He knows …ALL.

God had a purpose for the destruction of the Amalekites, COMPLETE – utter destruction. You see, some many-many years later, an ancestor of an Amalekite emerges. The book of Esther. Remember the bad guy Haman (Boo!) the guy who manipulated the King’s decree to annihilate the Jews? He was the ‘son of Hammedatha, the Agagite’ (Esther 3:1). Scholars believe the ‘Agagites’ are of King Agag – King of the Amalekites (1 Samuel 15:8). But there’s more: remember Mordecai (YAY!) the cousin of Esther, who raised her, he was of the tribe of Benjamin, a descendant of Kish – Saul was the son of Kish. So, here we are AGAIN, Haman (Amalekite) and Mordecai & Esther (Saul).

The principle stares us in the face – God says take care of it NOW, destroy it or you WILL see it again and seeing it again may destroy – YOU! How many of us have been broken-hearted because we did not obey thoroughly?  God desires complete obedience. Partial obedience is disobedience.  God doesn’t want most or some – He wants it ALL!  Just ask the folks who were taken captive by the Amalekites later in 1 Samuel 30 and the folks praying for Esther as she approaches the king to address the situation concerning their pending annihilation.

Obeying God with a half heart leads to a broken heart.

*Side note: Scholars are in agreement, they don’t know exactly where/when/how the Amalekites ancestry carried on – but they did.  We see in the story (1 Samuel 15) that Saul told the Kenites (folks in the region, v6) to leave before he went after the Amalekites, giving them the opportunity to flee the bloodshed. Could some Amalekites have snuck out among them? Also, it is said that Saul attacked the Amalekites within a certain regional parameter (v7). Were there more outside those parameters? We see later in 1 Samuel 27, David raided an Amalekite village (they had a village?) and again chapter 30, David encounters more Amalekites, “David fought them from dusk until the evening of the next day, and none of them got away, except four hundred young men who rode off on camels and fled.” (v17)  THOROUGH obedience is required.

Skill of the Dance

The presence of God.  So close, so intimate.  Ever feel you are extremely clumsy with Him?  You may say the most weirdest things, or you think your actions define you as a mis-fit?  You scream “I NEED  SKILLS  HERE!”  as one whom their life depended on it.

The Lord gave me a picture of dancing. Slow – graceful, elegant unity, like that of ball room 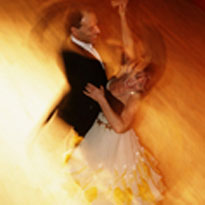 dancing. Yet to have the smooth rhythm and glide across the floor, there can only be ONE who leads.  Folks it aint US! This is what the Father wants from us, that our walk with Him be a graceful dance. He as the leader. As He leads, He places pressure on our back so gently, we know to move forward, or a soft tug in one direction or the other.  True partners of the dance, always knows where the other is, placing a confidence in the next move.  The skill of the dance.

Don’t FEEL like dancing?  You have no energy emotionally or spiritually.  Ps. 30:11  “… He has turned my mourning into dancing…”  He stands near by, with His hand out, asking so gentleman like, “May I have this dance?”  He is patient, tender and LOVES to dance with us, He will teach us.  Our mis-fit ways will soon turn into a beautiful glide.

It may take a lifetime to learn the skill of the dance, but to sense and obey His touch can be so beautiful as we follow along in the music of life.  The skill is … practicng the presence of the Lord.

Have a great God-loving, in step… dancing with Him week!!